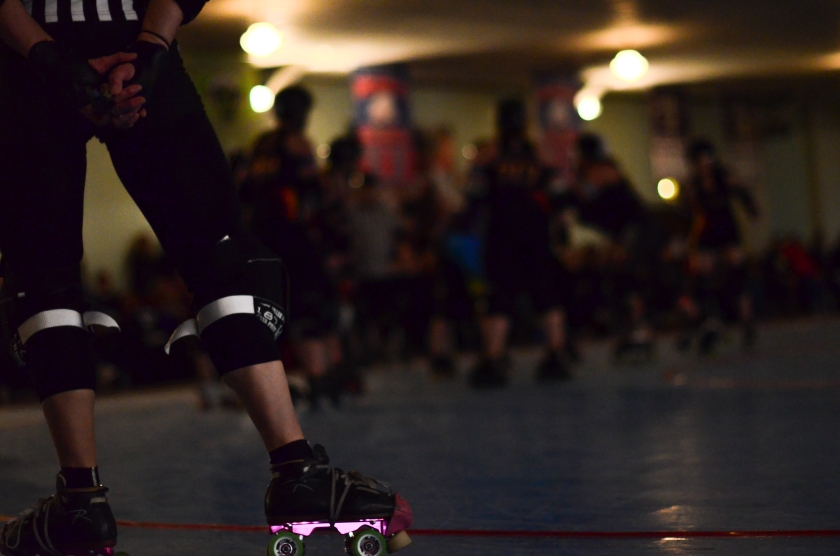 Roller derby athletes are a fearless specimen. Just ask “Tiny Ninja,” a.k.a. “Tinja.” The captain of the Detroit Derby’s D-Funk All Stars once aptly described roller derby as a mixture of Nascar and hockey. Players whip around a small indoor track while “the jammer” battles her way through the opposing team. In the process, there are plenty of tangles, collisions and pile-ups.

One of the most striking aspects of the sport is that it shatters traditional notions about femininity—players do not fit neatly into any one archetype. They are all shapes and sizes—big, small, muscular and svelte. Some are brandished in tattoos, others are donned in sparkly eyeshadow and lipstick. One woman painted her face like a skeleton, another wore skintight shorts that could be mistaken for underwear. It is a come-as-you-are vibe steeped in inclusivity and comraderie—even among players on opposing teams who can be seen hugging and high-fiving each other.

The value of roller derby crystallized for me at the end of the Sunday season-opener between the Grand Prix Madonnas and the Devil’s Night Dames. That was when girls and young women between the ages of 5 and 17 shot up from their seats, lined the track and waited anxiously for a moment with the athletes. Among the adoring fans was 11-year-old “Debbie Scary,” a player on the co-ed junior derby team. As the poised young skater extended her hand to the older players, her eyes gleamed with admiration.

Indeed, any young woman who grows up in a culture of acceptance, camaraderie and healthy competition—precisely the roller derby m.o.—will likely see herself as strong, capable and, most importantly, equal to any man. Skate on, Ms. Scary.

The Detroit Roller Derby is comprised of four home teams that battle each other, three traveling teams and a junior league. They play on the fourth floor of Detroit’s historic Masonic Temple, a unique venue for derby where the bloody marys flow and the crowds range from rowdy fans to families with small children.