As the sun rose over the raging Tirsuli river it illuminated the town’s despair. Roosters sang, stray dogs hobbled through trash-strewn alleys and children received morning baths on the street.

The “bus station” was comprised of several 1970s buses painted in bright colors parked in the town’s muddy center.

Contrasting the dingy surroundings were 20- and 30-something tourists waiting for their connecting bus to depart. Outfitted in expensive hiking boots and multi-day backpacks, they sat in ramshackle restaurants eating dal baht, a Nepali staple made of white rice and grainy lentil soup.

Although the buses were sold-out, Bimala suggested we try and sit upfront on a small cushion next to the driver’s seat. But it wasn’t long before two ailing Nepalis claimed this cushion as their own.

The small number of tourists on the bus were now sitting comfortably with their responsible and prepared guides. I glared at Bimala, who began chatting with the bus driver in Nepali. Although Jess and I said we would be happy to handle the tickets ourselves, Bimala had assured us she would take care of it. And at this point, we still believed the lie spewed to us, that, by Nepali law, we had to trek with a guide.

Now the bus was teeming with passengers. Each and every seat was taken and people were smashed into one another, standing shoulder-to-shoulder in the aisles.

After some deliberation with the driver, Bimala announced: “You should go sit on the roof of the bus. More room up there.”

My heart skipped a beat. Bus accidents in Nepal are alarmingly common. Stories about buses plunging from 1,000-foot cliffs into canals and rivers surface in the news frequently. And the dirt road to Dhunche, carved into the side of death cliffs, riddled with sunken potholes, loose rocks and landslides, is disputably one of the most dangerous mountain passes in the country, if not the world.

But the stifling conditions inside the bus left Jess and me with little room to protest (at least we could jump off the bus in case of an accident, right… oh god). We looked up to the rooftop. Reaching it involved scaling the side of the bus, gripping onto a skinny window ledge and climbing up a set of metal handles.

Once up top, we saw we were the only women, and decidedly the only foreigners, opting for this most scenic section of seating. As some of the young Nepali men erupted into country song, Jess and I loosened up with a few nervous laughs, our bodies wedged between sacks of rice, backpacks, suitcases and people.

An 18-year-old Nepali named Dennis turned to us. “Where are you from?” he asked. I told him we were from the U.S. “Cool,” Dennis said, pulling back his light brown dreadlocks. “What kind of music do you like? I love rock, punk rock and metal, especially Metallica,” he continued, pointing to his guitar case.

I smiled at him. “I like some punk and metal too!” I said, trying to mirror his enthusiasm.

At the time, we didn’t know just how fortunate we were to have Dennis on the roof of the bus that day.

The ride started off innocently enough. Cruising at a comfortable pace, the wind was gentle, the sun mild. Then we heard a yell from the men in front.

Jess and I ducked our heads just as a group of menacing tree branches missed us by a few inches. Crouching down with our hands splayed over our necks, we played the ‘don’t get beheaded’ game for a while longer until the bus stopped in the middle of nowhere. Suddenly, everyone was climbing down. Jess and I turned to Dennis like baby ducks waiting for mother goose’s orders.

We had to abandon our rooftop seating because of a police checkpoint. (Yes, our riding on the roof of a bus was totally illegal). Dennis warned us we would have to engage in this same song and dance at least five more times throughout our journey. We were psyched by the news.

We followed the queue of rooftop riders,  hiking up a steep, muddy hill to a small village, where many of the locals gaped at Jess and me as if we were aliens.

As we headed towards the town’s little center, I saw plenty of photo opportunities.

First it was a woman in tribal garb with gleaming jet black hair brushing the dusty ground. I asked Dennis to translate for me. “Your hair is beautiful,” I told the woman, “Can I please take your picture?”

“No,” Dennis translated, “She is too embarrassed.”

As I smiled and walked away, I noticed a young woman and her child standing on the roof of their home looking all too picturesque with the mountains behind them. Instead of bringing the formalities of a translator into the mix, I simply pointed at my camera and smiled. The woman returned my grin and posed with her child. 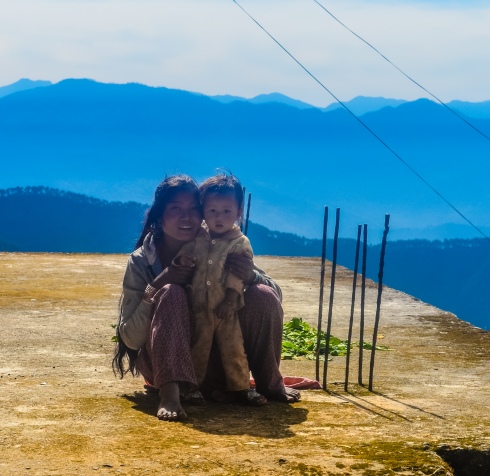 Finally, the bus lurched forward from around the corner. We waited longer while the ticketed passengers bought snacks and used the bathrooms.

When it was time to climb back up to the top, there was now a cadre of new passengers on the roof and I found myself pushed dangerously to the edge, my legs dangling over the side.

After a few more stops and police checkpoints, the bus started to climb a steep hill and we began ascending into dangerous territory. As I sat with my knees to my chest, sandwiched between other passengers, the bus skirted the edge of a sharp cliff. I watched as the Tirsuli river shrank below us. As the road changed from pavement to dirt, the 40 or so passengers sharing the roof with Jess and I clung to one another while the bus hit craters. We swayed from side to side and flew into the air.

Despite the sporadic yells and shrieks from some of the rooftop passengers, Jess had somehow fallen asleep moments before with her head on her knees (?!). Meanwhile, I sat stone-cold watching as the road grew steeper.

When Jess woke up, we had climbed several more switchbacks and many of the people on the roof had banded together, like a human chain, to prevent each other from an undesirable exit off the bus.

When the road widened slightly the bus driver pulled to the side for a bathroom break. Nepali women had no shame in their game. Many squatted right in front of the bus.

This time when we climbed back up I was pushed to the very front of the roof. As the bus navigated bumpy, rocky and muddy terrain, I found myself with nothing to hold on to. Everyone around me began shrieking as the bus plummeted down a steep section of road blanketed in debris. It was the site of a recent landslide.

Fortunately, a Nepali man sitting next to me took a firm hold of my arm while he gripped onto a protruding bar from the luggage rack. Sitting on my other side was a Japanese man who I soon found myself holding onto so that he too didn’t take the plunge. As I pulled his arm close to my side he smiled graciously.  That day, although none of us could communicate with each other, we forged some deep bonds among strangers, banding together to stay alive.

Then, much to my relief, the road began to plateau. A long string of buses and  four-wheel drive vehicles came into view. The bus pulled over and everyone got off to investigate.

Drenched in nervous sweat, I gazed into the Himalayan sun towards the accident that was holding up traffic. I saw we were in for an even more treacherous ride ahead. The road  was deathly steep in some sections and flooded in others; the edge razor sharp.  I began to devise a plan in my head, that I hoped I could rationally present to Jess and Bimala, to get us off the bus.