A thick haze from burning trash enveloped the Taj and the river Yamuna.

And just outside the Taj…

Caution to all Indian motorists–Jess is driving an auto-rickshaw!

Jess and a sea of lucky young boys. 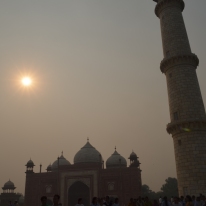 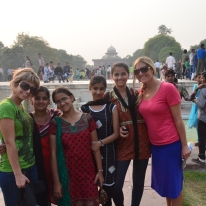 Some of the lovely ladies who asked for our photo 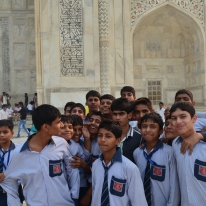 Built to honor a Mughal emperor’s “favorite wife,” the Taj Mahal–an architectural wonder of the modern world, is not something I expected to see in my lifetime. Although I was planning to spend a few days in Delhi, India, the Taj–located in Agra, is an unattractive five-hour drive from Delhi. In retrospect, I guess I owe this impromptu, and no doubt awesome visit to a smooth-talking Tibetan man named Ali.

It was my second day in India and just braving the chaotic streets outside my hotel would be a feat in itself. Dodging cars, auto-rickshaws, barefoot beggars and women holding diaperless babies,  I soon found myself in an auto-rickshaw heading towards a “government tourist office,” where there’s an abundance of “free city maps.”

Fifteen minutes later, and after the driver insisted that both my friend Jess and I scoot into the front seat with him to each experience being at the helm of an auto-rickshaw, we approached a small tourist office. Kooky pictures of tourists with big smiles and cameras to match were plastered to the windows. This place had no affiliation with the government and was exactly what I was hoping to avoid. Great.

Bolting from the office to greet us was a small Indian man. I returned the salutation with a scowl. “Please, take us back to the street you picked us up from,” I pleaded with the auto-rickshaw driver.

Shaking his head while offering us a bewildered stare, our driver it seemed no longer understood English. How convenient. After a few frustrating moments, Jess and I begrudgingly entered the tourist office.

A svelte man with black hair, olive skin, and a pressed dress shirt and pants looked up from his desk. “Hello,” Ali said nonchalantly. He half smiled to reveal a set of straight white teeth.

We sat down in front of Ali and braced ourselves for the sales pitch. But moments later, my posture softened. Ali was actually a likable guy, though I was still nervous to sip the Indian chai that his cronie had delivered us. Spending enough of my formative years gallivanting through warehouses in Detroit has hardened me as a traveler, and I began to imagine a number of different drugs that might be dissolved in the rich, milky tea. (Do I sound paranoid? Absolutely. But then again, India is not a place to practice unconditional trust with perfect strangers.)

Anyway, I’ve obviously lived to tell the tale so I think we both know there were no drugs in the tea. But what a story that would have been!

Much to my amazement, Ali actually offered us a reasonable deal. For $25, he would give us a driver for the day, who would take us to each and every sight we wanted to visit in Old and New Delhi. Jess and I surveyed the map littered with sights and decided without much deliberation that this would be a quick and easy way to see the city. Then Ali told us about the Taj Mahal.
“It’s really only a two-hour drive,” he explained.

Two hours? Jess and I looked at each other. When is the next time we are going to be this close to the Taj? We decided to mull it over during our day of sightseeing; if it all worked out with our driver perhaps we would reserve him again for the following day.

A small, earnest man named Kamal drove us all over the city that day, and we felt more like his daughters than a couple of random American girls he was chauffeuring around. When we pulled over to the side of the street so I could buy a water, the man running the concessions stand tried to pocket my change despite my demanding it back. So Kamal promptly exited the vehicle spoke sternly to the man and retrieved my change. And when Jess and I inquired about a beer store, Kamal delivered us to one, parked, and allowed us to drink beers in his cab, as our drinking them on a public street, he warned, is frowned upon. So when we returned to the tourist office at the end of the day, giggling and buzzed on Indian beer, we reserved a driver to take us to the Taj the following day hoping it would be Kamal or someone just as pleasant.

However, it was not Kamal who picked us up the next morning at 9 a.m., but an unfriendly fella who immediately eyed Jess and I with slight disapproval. Two hours till the Taj?! We didn’t care who was driving us at this point, and both Jess and I were looking forward to seeing more of India on the drive.

Five hours later, not TWO, we were finally cruising through the city of Agra. Irritated by this alleged “two hour drive,”  Jess and I had no choice but to finish chewing up the lie that was fed to us. Besides, if Ali had been truthful about the Taj’s actual distance, we may have never signed up.

As for seeing another piece of India during our drive, we didn’t see too much of the pleasantries of rural or suburban India and instead were confronted with more of its harsh realities. Sitting in bumper-to-bumper traffic on an eight-lane road, I watched as a barefoot little girl about 4 or 5 years old with a dirt-smeared face knocked on my window. She was cradling an infant in one arm and motioning for food with the other while a group of Indian men in the next car looked on and scoffed.

When it seemed we were finally cruising on the highway again, our driver abruptly pulled onto the shoulder and before he exited the car, he warned us not to take photos of the men with monkeys for they would charge us a steep price. Men with monkeys? Stupefied, Jess and I looked at each other and wondered why in the hell the cab driver had stopped here on the side of the road?

Sure enough, one by one, leashed monkeys donned in ruffly dresses and pink lipstick approached our taxi. The sleazy men holding their leashes instructed the screeching monkeys to jump up onto the taxi window while they asked us to take a photo. I shook my head at the men and swallowed hard. My throat felt like it was coated in pins and needles from breathing in the smoky, polluted air during our drive with the windows down. In addition to the toxic fumes emitted from old cars, people were burning mounds of trash street-side and a large trash incinerator located in Delhi was surely adding to the poor air quality. Despite being five hours away from Delhi, Agra offered no escape from the thick haze that envelopes India’s capital city.

As we neared the Taj, a man wearing dress pants, a collared shirt and aviator sunglasses jumped into our car while we were stopped at an intersection. Umm, hi? Apparently this sharply dressed man was to be our guide at the Taj. Moments later, as we exited the car we approached a queue of hundreds of people that snaked down the sidewalk. This was the line for Indian residents. The other line–for tourists, well, there was no line so Jess and I marched down a long gated maze while Indian families, couples and elders gaped at us.

When I first caught glimpse of the Taj Mahal it was like seeing a mythical creature like the Tooth Fairy or Santa Clause; its image is so embroiled in popular culture but I had never expected to see it with my own eyes.

But it was not the Taj that caught the attention of many of the other visitors that day, but Jess and I. Countless young women, and a handful of young men, wanted their pictures taken with us (we were some of the only non-Indians out of the thousands of people milling around the monument).

Some of the most lovely and elegantly dressed young women, bedecked in sparkly saris posed in pictures with Jess and I as they showered us with smiles and compliments. But it was these gracious ladies who deserved the veneration.